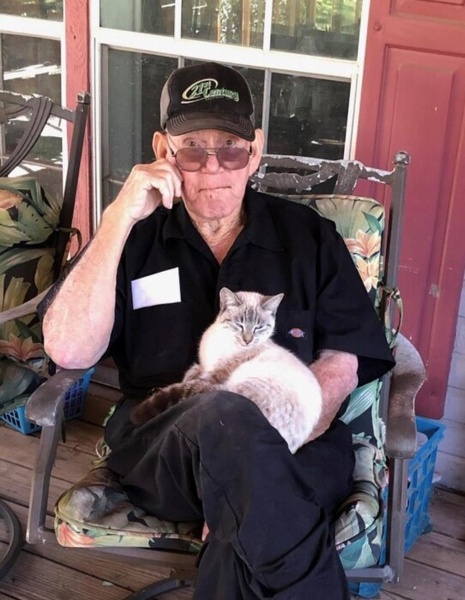 He passed on Monday June 7, 2021 in Pearland Texas. He met the love of his life Charlotte Doughty and they were married Stafford Ks on February 9, 1958. Vern joined the Army and served during the Vietnam War. He has left to mourn his passing is his widow, Charlotte. His children Carrie and David Brown, Vernon Ray Jr and Robin Mastin, Melanie and Rob Gage.

Vern grew up on a farm and loved it. He was able to farm wheat and alfalfa. He also drove a school bus for 13 years. He took care of all the kids on the bus as if they were his own and considered them friends later in life. He was also an artisan working with stained glass.

Vern and Charlotte moved to Port Arthur, Texas in 1990. While there he drove a medical bus from Port Arthur to Galveston for another 13 years. He was an avid bowler for many years. He bowled 3 times a week. He considered his bowling friends family. They were all very important to him. Vern and his bowling cohorts bowled in the Southwest bowling tournament for about 40 years. Vernon Jr, Clayton and Shawn bowled with Vern Sr. for many years. To bowl with your son and grandsons in such a high caliber tournament is a great honor. Vern has 2 surviving brothers, Bill and Darlene Mastin and Bert and Janis Mastin. Preceded in death by his parents and siblings: Bert and Bertha Mastin, Hiriam Mastin, Beatrice Foss, Rosalie Mastin and Margaret Piland.

Vern has also left behind many nieces, nephews, cousins and many long-time friends, all of whom will miss him for a very long time.  Memorial service will be 10:30 A.M., Saturday, June 26, 2021 at Minnis Chapel, St. John with Pastor Wade Russell presiding.  Burial will follow in the Fairview Park Cemetery with military honors.  Memorials may be given to the USD-350 Education Foundation in care of Minnis Chapel, P.O. Box 34, St. John, KS  67576.

To send flowers to the family in memory of Vernon Mastin, Sr., please visit our flower store.