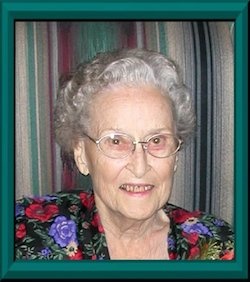 ST. JOHN, KS- Velma Ruth Zimmerman, 96, of St. John, KS passed away on Tuesday, May 6, 2014 at Kenwood Plaza in St. John. Funeral services will be held Saturday, May 10, 2014 at Minnis Chapel in St. John at 2:00 p.m. with Pastor Irving Simon officiating. A private family graveside service will be held at a later date. Velma Ruth Siegrist was born on December 19, 1917 near Hutchinson, KS to Alpha and Hazel (Glass) Siegrist. She attended Valley Pride grade school in rural Hutchinson then attended Hutchinson High School, graduating in 1934. She attended one year of junior college then was accepted into the nurse's training program at Grace Hospital and School of Nursing in Hutchinson, graduating as a registered nurse in 1940. Almost immediately, she found a position with Dr. Louis Graves in St. John and worked for him until his death in 1970. She then worked as Director of Nursing at Hearthstone Nursing Center in St. John until her retirement in 1986. Velma married Dillian McFarland Zimmerman on December 21, 1941 as he began service in the U.S. Navy during WWII. After the end of the war, she and Dillian settled down in St. John where he was a printer and photographer for the St. John newspaper. She and Dillian raised six children to successful adulthood, and were proud of their grandchildren and greatgrandchildren. Dillian passed away April 21, 1996. In 2002, Velma was honored by being named "Citizen of the Year" by the St. John Lions Club, and in 2005 she was named Lady of the Year by Xi Xet Eta Chapter of Beta Sigma Phi. She also was a member of the Stafford County Historical Society Board, the Hall Museum Anex Board, served for many years on the board of the United Methodist Church in St. John and also served for several years on the St. John Hospital board of directors. She is preceded in death by her parents, stepmother and husband; brothers- Lamoin, Elvin, Floyd, Harlan and Billy; sisters- Emma Siegrist, Verna Schroeder, Betty Brown and Patty Robertson. She is survived by four sons- Dillian, Jr. (Mac) and wife Debbie of St. John; Tom and wife Zora of Ames, IA; Rex and wife Diann of Kiowa, KS; Jan of St. John; two daughters- Judie Rice and husband Wayne of Hutchinson, KS; Julie Fox and husband John of St. John, 12 grandchildren and 15 great grandchildren. Visitation will be held on Friday, May 9, from 5:00-7:00 p.m. at Minnis Chapel with the family present. Memorials are suggested to Kenwood Plaza, the Ida Long Goodman Library or St. John United Methodist Church in care of Minnis Chapel, P.O. Box 34, St. John, KS 67576. Condolences may be shared at www.minnischapel.net

In Lieu of Flowers, Contribution

To send flowers to the family in memory of Velma Zimmerman, please visit our flower store.