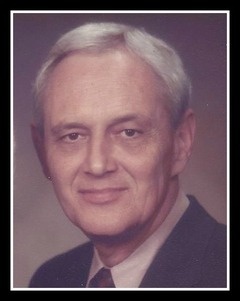 Stan Harris age 83, was born August 18, 1931 in Stafford, KS to Frank and May Hahn Harris.  Stan was an only child, raised in St. John, KS.  He graduated from St. John High School and the University of KS.  He served in the US Army during the Korean War and was an architect and a partner in the firm PKG in Lawrence..   He worked on many building in the Lawrence and surrounding area.

Stan died at Lawrence Memorial Hospital on November 30, 2014 after a short fight with colon cancer.

He married Margaret Ann Lynch on June 3, 1956.  They enjoyed 58 years of marriage.  They had one daughter Lisa Ann.  Stan loved his family and enjoyed traveling to see his grand children’s activities and to visit his great grandchildren.  He leaves behind his wife “Maggie”, his daughter Lisa, her husband Joe Cornwell along with his grandchildren Melissa and Jake Cline, Cami and Matt Bright, Ty and Vanessa Cornwell, Marci and Austin Klug and his great children Jack, Gentri, Kolt, Hadley, Victor, and was looking forward to the birth of Kambri in March 2015.

Services will be 11:00 A.M. Wednesday, Dec. 3, 2014 at Minnis Chapel, St. John with Pastor Carl Feril.  Burial will follow in the Fairview Park Cemetery, St. John.  Visitation will be Tuesday (today) from 1-7pm at the funeral home.

Memorials may be made to St. John Educational Foundation in care of Minnis Chapel, P.O. Box 34, St. John, KS  67576. Condolences may be left at www.minnischapel.net

To send flowers to the family in memory of Stanley "Stan" Harris, please visit our flower store.