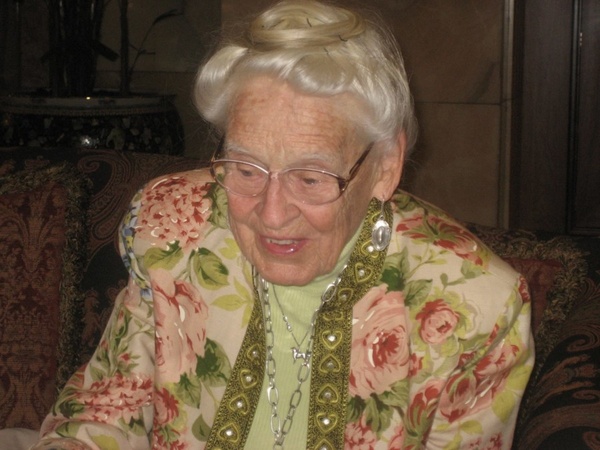 Sadie “Sid” Ruth Barber- Dale, 99 of St. John, Kansas, passed away on December 8, 2016 in Aurora, Colorado after a long and inspirational life.  Visitation will be at 7 p.m., Wednesday, December 14th at Minnis Chapel in St. John.  Funeral services will be held at 10:00 a.m., Thursday, December 15th at Minnis Chapel with Tom Reazin officiating.  Burial will follow at St. John Cemetery. Arrangements are by Minnis Funeral Home.

Sid was born in Stafford County to Elmer and Ella Dale on March 28, 1917.  She graduated from Stafford High School.  She was married to James Alanson Barber for over 60 years.  Sid and Jim, both licensed funeral directors in the State of Kansas, owned and operated the funeral home in St. John until 1959 and the Barber-Dunsford funeral home in Dodge City from 1959 until the mid 70’s.  She was an active member in the Methodist Church in both communities.

She was preceded in death by her husband James, her brothers Warren Dale, Lewis Dale, Murl Dale and Dick Dale, and her sisters Charlotte Heide and Mary Glenn.

Memorials may be given to Shalom Cares in Aurora, Colorado where Sid spent the last 14 years of her life. Please go to www.shalomcares.org for donation information. The family of Sid Barber wishes to extend our sincere thanks and appreciation to the staff at Shalom Cares for their steadfast love and care for their mother and Gramy.

To send flowers to the family in memory of Sadie "Sid" Barber, please visit our flower store.