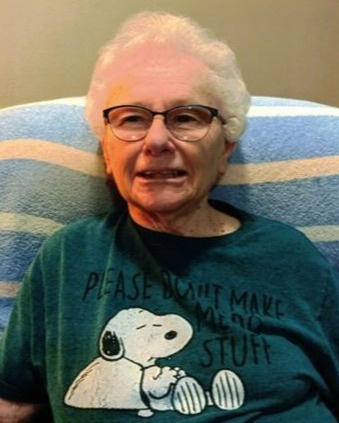 Patricia S. “Pat” Scheck, age 82, passed away October 2, 2022 at Diversicare of Sedgwick, Sedgwick, KS.  She was born on July 26, 1940 at Anthony, KS, the daughter of Grant E. and Maxine D. (Frank) Martin.  Pat was a resident at Diversicare of Sedgwick, having recently relocated from Legend of Hutchinson.  She was formerly a resident of Macksville, KS from 1961 to 2019.  She was a 1958 graduate of Attica High School and then attended one year at Pratt Community Junior College.  She worked several jobs over the years, including as a waitress at the Char-Burg in Pratt, a homemaker, a bookkeeper for A & S Repair in Macksville, a librarian at the Macksville City Library, a CNA at Leisure Homestead in St. John, and a salesclerk at ALCO in Larned.  She retired in 2005.  On November 28, 1959 she married Linus F. Scheck at Pratt, KS.  He preceded her in death on May 20, 2019.  Her memberships included, St. Bernard’s Catholic Church and Altar Society, Belpre, KS.  She enjoyed reading books, scrapbooking, counted cross-stitching, latch-hooking, playing the piano, and loved playing cards.  Survivors include three sons, John L. Scheck, Wichita, KS, Jeffery J. Scheck (Angela), Belpre, KS, Jay A. Scheck, Great Bend, KS; a daughter, Julie K. Scheck (Bernadette Romero), Wichita, KS; a brother, Robert Martin (Mary), Eureka, KS; a sister, Joyce Thomas, Hennessey, OK; two grandchildren, Andrew Scheck (Kate) and Cody Rosenhamer (Reagan); three great-grandchildren, Jacelyn Scheck, Kole Scheck, and Kylee Scheck; and one great-grandchild on the way.  She was preceded in death by her parents; a brother, Wallace Martin; and a brother-in-law, Eldon Thomas.  Visitation will be on Thursday, October 6, 2022 from 1-7 PM in the Minnis Chapel, Macksville, KS with the family present from 5-7 PM.  Rosary/Vigil service will be 11:00 AM Saturday, October 8, 2022 in the St. Bernard’s Catholic Church, Belpre, KS.  Funeral Mass will be 1:00 PM Saturday, October 8, 2022 in the St. Bernard’s Catholic Church with Father Prakash Kola.  Burial will follow in the Farmington Cemetery, Macksville, KS.  In lieu of flowers, memorials may be given to the Macksville City Library in care of Minnis Chapel, P.O. Box 34, St. John, KS  67576.

To send flowers to the family in memory of Patricia Sue Scheck, please visit our flower store.

Family present from 5pm to 7pm

Burial will follow at the Farmington Cemetery, Macksville, KS