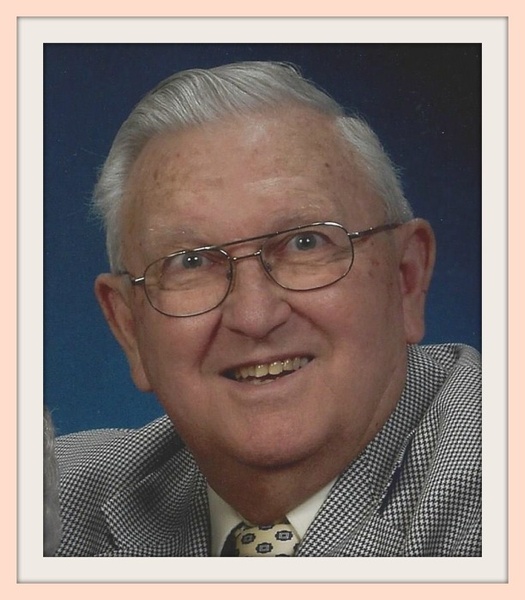 Milton Mason John, Jr. was born on July 15, 1925 in St. John, KS, the son of Milton Mason and Marguerite Joy (Lickiss) John.  He passed away on March 27, 2016 at Harry Hynes Hospice, Wichita.  He married Dorothy Lou Witcher on Aug. 29, 1948 at the St. John United Methodist Church.  They had been married 62 years until his wife’s passing in 2010.  They had two sons, Mason Kent and Dru Hunter who are both deceased.  He graduated from St. John High School in 1943 and left immediately to the U.S. Navy until 1946.  After marriage, he attended Hutchinson Jr. College for a semester before entering the St. John U.S. Postal Service in all positions, including Postmaster (1955-59), when he transferred to Route #1 Rural Carrier until his retirement in 1989.  Having 3 years in the Navy and 41 years in U.S. Postal Service, he had a total of 44 Federal years.  His memberships included: Lifetime member of St. John United Methodist Church, life member of American Legion, Odd Fellow Lodge #539, over 50 years with National Association of Rural Letter Carriers and Charter member of WWII Museum in New Orleans.  He was preceded in death by his wife and two sons.  Survivors include a granddaughter Erin (Pedram) Rahbar, grandchildren Alexia John, Kamran Mason Rahbar and Lilly Grace Rahbar, all of Woodstock, GA; sister, Joan Moody of St. John, KS; niece, Jo Ellen Moody of Little Elm, TX; nephew, Jerry (E.J.) Johnson of Canton, GA, numerous cousins and friends from various places.  Memorial service will be at 10:30 A.M., Saturday, April 2, 2016 at the St. John United Methodist Church, St. John, KS, with Pastor Nathan Gift presiding.  Inurnment will follow at the Fairview Park Cemetery, St. John, KS.  Memorials may be given to the Methodist Church or Wounded Warrior Project in care of Minnis Chapel, P.O. Box 34, St. John, KS  67576.

To send flowers to the family in memory of Milton John, Jr., please visit our flower store.