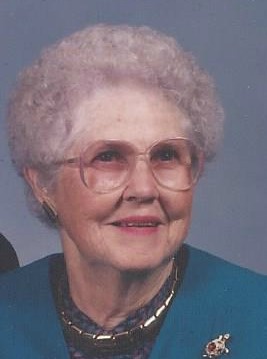 Mary Margaret Staton-Boyles, 94, of St. John, passed away on Saturday, March 25, at Kenwood Plaza.  She was born on October 27, 1922, in St. John to Leslie Lyman and Mabelle (Hering) Mater.  On August 03, 1947, she married Howard “Jack” Staton in St. John, he died on June 03, 1980.  She was united in marriage to Ben Boyles on October 31, 1982 in Wichita, he died on February 12, 1999.  Surviving members of the family include, her children Steven Staton and Judy Thiessen (Carvin); five grandchildren, Brendon Thiessen (Kathy), Rachael Ostrom (Wayne), Jaime LaRue (Sean), Craig Stutzman (Leah), Jon Stutzman (Nicole); 22 great-grandchildren.  She was preceded in death by her parents; two husbands, and a brother Robert Mater.  Funeral Service will be Tuesday, March 28 at 11:00 am at the St. John First United Methodist Church with Pastor Nate Gift officiating.  Burial will follow at Fairview Park Cemetery, St. John. Visitation will be Monday, March 27th from 1-7 pm, with family present from 5-7, at Minnis Chapel, St. John.  Memorials can be made to the First United Methodist Church or Kenwood Plaza, they can be sent in care of Minnis Chapel, PO Box 34, St. John, Ks  67576.

To send flowers to the family in memory of Mary Staton-Boyles, please visit our flower store.