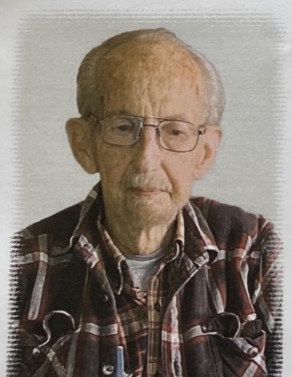 Died 08/07/2022 in Holyoke, CO at the age of 86 from Congestive Heart Failure. Born in Omaha, NE 09/05/1935 to Joseph Schad and Viola Webb. Married Joyce Menges Aug. 13, 1960 in Wichita, KS. Joyce died 12/28/2004. LeRoy worked many jobs over the years including sheet metal work for the airline industry, TV and appliance repair for Gibson, Titus and Stafford in Great Bend, KS and as an electrician for Essex in Hoisington, KS from 1974-1994. He later worked at Walmart in Great Bend, KS retiring in 2005. He entered the Army in 1958 and then the US Army Reserve and was honorably discharged in 1964. He served in Korea in 1959 and was a member of the 1stCalvary Division. He was a member of the American Legion in Great Bend, KS and in Holyoke, CO. LeRoy was a member of the Knights of Columbus in Seward, KS and the Hudson Volunteer Fire Department in Hudson, KS. One of his favorite things to do in his free time was to go camping and fishing.  Every year he and Joyce would take the family to the lake for a camping adventure. There he taught them how to fish with bamboo fishing poles until they could handle a real fishing pole.  Many times, these trips ended abruptly due to a heavy thunderstorm which would often flood the campsite. But he always enjoyed this time with his family. He loved riding motorcycles and eventually talked Joyce in to riding with him. They joined the Central Kansas Road Riders in the 1990s and enjoyed many activities with them including Poker Runs. In his later years he took up craft work and attended many craft shows in Kansas and Colorado.  His began doing scroll saw projects which quickly became his favorite. He made many items to sell but also made personalized items for his children and grandchildren. LeRoy attended high school at Subiaco Seminary Academy and graduated in 1954. He and Joyce raised 6 children and moved to Hudson, KS in 1969 where he remained until 2021 when he moved to Colorado to be near his daughter and her husband. LeRoy is survived by his sons James Schad and children Amy, Daniel and Austin Schad; Fred Schad; Ken Schad and children Jared and Jenna Schad; Raymond Schad, wife Rachel and son Peter Schad, son David Schad and family; and daughter Laura Krogmeier and husband Paul; their children Karen & Kirtlan Lewis and family; Diana and Justin Suhanyi and family; Philip and Victoria Krogmeier and family; Teresa and Luke Gregory and family; Brother Jim Horton and wife Lynn and sister Debbie Connor and husband David and family. Sisters-in-law Carol Henderson and Geraldine Menges as well as many nieces and nephews. He was preceded in death by his parents Joseph Schad and Viola Horton, his wife Joyce, nephews Zachary Horton, Michael Menges, Matthew Menges and niece Mildred Menges; brothers-in-law Fred Menges Jr., Jerry Menges and John Henderson and sister-in-law Maxine Menges. Rosary for LeRoy will be Thursday, August 11th at 7:00 p.m. at St. Patrick Catholic Church, Holyoke, CO. The funeral will be Friday, August 12th at 11:00 a.m. at St. Patrick Catholic Church followed by lunch with Fr. Jerry Rohr officiating.  Interment will be Monday, Aug. 15, 10:00 a.m. at the Golden Belt Memorial Park in Great Bend, KS. Memorial contributions may be made to the donors’ choice.

To send flowers to the family in memory of LeRoy Schad, please visit our flower store.