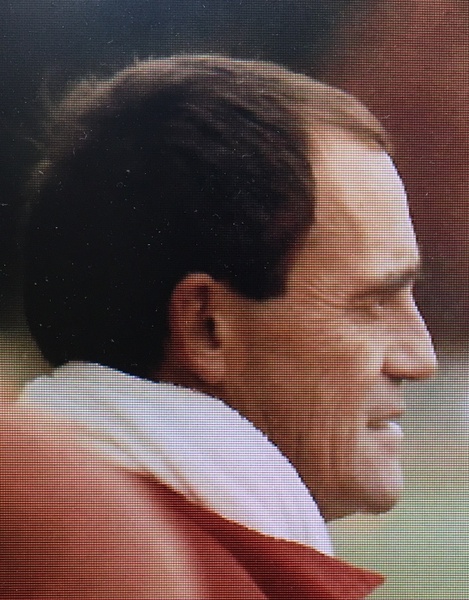 Larry Lee Carrier passed away August 17, 2017 at Hays Medical Center in Hays, Kansas. Larry was born April 3, 1934 to Victor E and Louise (Nagel) Carrier in Pratt, Kansas. As a young boy, Larry spent the abundance of his time at Carrier Cleaners which was owned and operated by his parents, Vic and Louise in St. John, Kansas. When Larry’s father, Vic was not occupied by business at Carrier Cleaners, his time outside of work was spent with Larry in their duck blind hunting or in their favorite fishing spots on the Rattlesnake Creek. This served as the muse for Larry’s unwavering passion for nature and all that dwelled in it. The great outdoors became the place where Larry’s spirit was most at home and at peace. The tales that came from his adventures and endeavors in the wilderness will be cherished forever by family and friends.

As a young man, Larry found another pursuit which opened up doors to opportunities beyond his wildest imaginations. Football came naturally to Larry. The instincts and talent he displayed on the gridiron while in high school caught the attention of the coaches at the University of Kansas. Upon graduating high school in St. John in 1952, Larry took his talents to Lawrence, Kansas to be a Jayhawk. As a 4-year running back on the Kansas University Jayhawk squad, the epic accounts of his experiences on and off campus will ever remain with friends and family. Most of which included his friend and fellow Jayhawk athlete, Wilt Chamberlin, who was a member of the basketball team at KU. Larry’s time in Lawrence was never to be too far from his mind. His love and fandom for Jayhawk athletics were held  near and dear to his heart. Larry never missed an opportunity, i.e. birthday, Christmas, to keep his beloved family attired in the latest Kansas University athletic apparel. Larry’s talents on the collegiate gridiron had now caught the eye pf professional scouts. In the 1958 NFL Draft in January, Larry Carrier was selected by the Detroit Lions at the running back position to become a professional football player. Unfortunately, Larry was also selected on the “other” draft, Conscription in the United States of America Military. Larry swerved in the Korean War and returned from Army service to marry his bride, Peggy Colleen Beaver, in late 1958.  Larry and Colleen had three children, Todd Michael, Lisa Ann, and Angela Lynn. Larry finished his teaching degree at Sterling College in Sterling, Kansas. Larry accepted a teacher and a head coach position in Miltonvale, Kansas where he and his family moved. Lifelong friends were made as he taught History and coached both football and basketball. After 7 years, an offer at another school drew Larry and his family to Kersey, Colorado. Larry taught History and was head coach of the high school football, women’s basketball, and track teams at Platte Valley High School in Kersey, Colorado.

Larry is preceded in death by his parents, Vic and Louise, and son, Todd Michael Carrier. His is survived by his daughters, Angie Fisher of Evans, Colorado and Lisa Reink of Haigler, Nebraska, his five grandsons, Jake Fisher, Derek Fisher, Cade Reinick, Ben Reinick, and Nate Renick. Larry’s passion for athletics and the outdoors was surpassed only by his pride and adoration of his 5 grandsons who carry on his fervor and fire today.

Love gifts can be made to :

A service date has not yet been set at this time.

To send flowers to the family in memory of Larry Carrier, please visit our flower store.