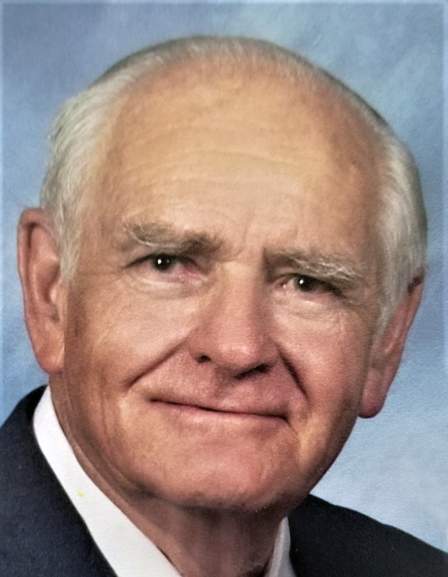 The family of James Hood invites you to a community memorial in his honor on Saturday, June 5th at 2:00 at the First United Methodist Church (807 E. 1st) in St. John, KS.  If you would like to share your memories of Mr. Hood, please email the Minnis Chapel your memories or ask to be put on the speakers list for the service (mitchminnis@gmail.com).  The family anticipates many guests from out of town and requests everyone follow CDC/Kansas guidelines to wear a mask indoors if not fully vaccinated.

James (Jim) Hood passed away peacefully on June 24th, 2020 at the grand old age of 98 years and 1 month.  Jim, or Mr. Hood to many, led a full and colorful life and his legacy impacted thousands of former students and visitors to his museum.

Jim was born to Theodore and Mabel Hood on May 23rd, 1922 in Kiowa, KS.  He had one brother, Cecil, that was seven years older than him.  Jim adored Cecil, but he was lost in WWII during the invasion of Normandy.  Jim married Joyce Elaine Hayes in 1956 and they immediately moved to St. John, KS.  They lived there until she passed in 2012 and together had four children.  Jon (Rosemary), Cyndy Unruh (Duane), and Joel (Tracy) survive while son Wendell passed away during infancy.  Jim is also survived by four grandchildren (Landon, Ce Chel, Jacob, and Sarah) and two great-grandchildren (Remington and Rhett).

Jim’s life story is remarkable.  He was part of the greatest generation that lived through the Great Depression, the Dust Bowl, and World War II serving his country as a patriot onboard a B24.  The war was a defining chapter in Jim’s life as he was a hero that flew harrowing missions over Nazi Germany.  On his last mission, his plane was so damaged that it crashed into the North Sea.  Upon impact, he was thrown through the front windshield and into the ocean, only to survive by clinging to wreckage until Air Sea Rescue could fish him out of the frigid waters.

For almost forty years Jim taught high school science and in retirement he opened the St. John Science Museum in 1987.  In 1968 Mr. Hood won the Kansas Teacher of the Year Award and was inducted into the Kansas Teachers' Hall of Fame in 1989. Generations of students have their favorite “Mr. Hood” stories that only they can truly appreciate.  The Science Museum became a second career that was his passion for almost thirty years, as it provided a place for new learning and a space for former students to meet with their favorite “mad scientist.”  Throughout most of Jim’s life he was active in both the First Baptist and Methodist churches of St. John.  For many years he sang bass in the church choir and was frequently called upon to lead hymns with the passion only he possessed.

A few years after Jim’s wife passed, he moved to Kenwood Plaza to begin the final chapter of his journey.  At Kenwood he felt safe, loved, and cared for.  The Kenwood staff adored his fun loving personality and enjoyed his impromptu science demonstrations.

A memorial service will be held in St. John, KS at some point in the future.  The family prefers to wait until it is safe to attend to ensure everyone has a chance to share their own story of Mr. Hood.  The family will make that announcement in local print and social media.  Memorials may be given to the St. John/Hudson USD 350 Educational Foundation in care of Minnis Chapel, P.O. Box 34, St. John, KS  67576.

To send flowers to the family in memory of James Hood, please visit our flower store.