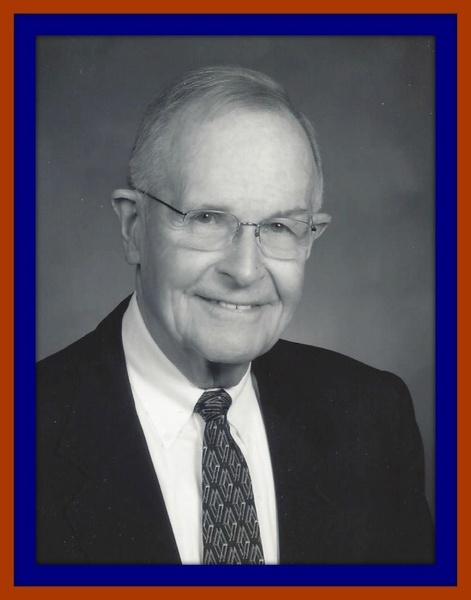 Harry W. Johnson passed away at Bickford Assisted Living in Mission, Kansas on July 31, 2016. He was born in Greensburg, Kansas to W.R. and Sylvia Johnson on August 6, 1921. He was a 1939 graduate of Greensburg High School and a 1943 graduate of Kansas University with a degree in Music Education. While at KU, he played the coronet in the KU band, threw the discus on the track team, and was a member of Phi Mu Alpha, the music fraternity, and Delta Tau Delta. He was recruited by Phog Allen to play basketball for the Jayhawks, but preferred being in the band instead. He served as a secretary for Russell Wiley, the band director at KU, making good use of the shorthand skills he learned from his mother, and his ability to type better than the “real” secretary. Also while at KU, he met the love of his life, Bobbee Hahn Johnson; they were married in 1944 and celebrated their 69th anniversary before she passed away in 2013. After graduation, he went to Notre Dame and The Ohio State University for the Navy's Officers Candidate School. He served as a Communications officer on the USS Clarendon in the Pacific during WWII. After returning from the war, he taught music for 1 year at Burton High School and then bought an independent insurance agency in St. John which he managed until 1986. His slogan was that he was “The Biggest Insurance Man in Town”, a reference to his unusual height. He was an honest and trust worthy businessman and he always had a smile on his face. In St. John, he was a member of the St. John Methodist Church where he was the choir director for many years. Later he joined a singing group, The Prairie Crooners. He sang bass and enjoyed going to music practice and performing. He was on the St. John HS school board and was helpful in the consolidation of the St. John and Hudson schools. He was a member of the Lions Club, Odd Fellows, and Masons. He enjoyed driving a car from a very early age and had a 34 Ford with a rumble seat when he was in high school. He took the family on many cross country car trips which they have many memorable experiences. He is survived by his children: Marcia (Dan) Suiter, Pratt, KS; Tom (Betty) Johnson, Topeka, KS; Nancy (Charles) Batchelder, Highland, KS; Todd (Sally) Johnson, LaCygne, KS. Brother-in-law: Randy (Carol) Hahn, Sioux Falls, SD; Sisters-in-law: Phoebe Hansen, Aurora, CO; and Bonnie (F.D.) Houser, San Antonio, TX. Grandchildren: Brent Suiter, Seattle, WA; Beatty (Amy) Suiter, Overland Park, KS; Mindy (Greg) Ruff, Leavenworth, KS; Matt (Laura) Johnson, Spring Hill, KS; Megan (Zach) Haddock, Olathe, KS; Cate (Chris Muellerleile) Batchelder, Swansea, Wales, UK; Hadley (Kelly) Clark, Kansas City, MO; Andy (Natalia Bracarense) Johnson, Chicago, IL; Whitney (Derick Davis) Johnson, Charlottesville, VA. 12 Great Grandchildren: Emily, Sydney, and Audrey Suiter, Mason and Gillian Ruff, Kamryn, J.T. and Lane Johnson, Garrett and Charlie Haddock, Gwendolyn Muellerleile, Arlo Davis. He was preceded in death by a son, Tim Johnson.  Funeral service will be 11:00 AM, Saturday, Aug. 6, 2016 at the First United Methodist Church, St. John, with Pastor Nathan Gift presiding.  Burial will follow in the Fairview Park Cemetery, St. John. Visitation will be on Friday from 1-7PM with family present from 5-7PM. Memorials may be given to the First United Methodist Church or the KU Endowment Association for the KU Band in care of Minnis Chapel, P.O. Box 34, St. John, Ks  67576.

To send flowers to the family in memory of Harry Johnson, please visit our flower store.