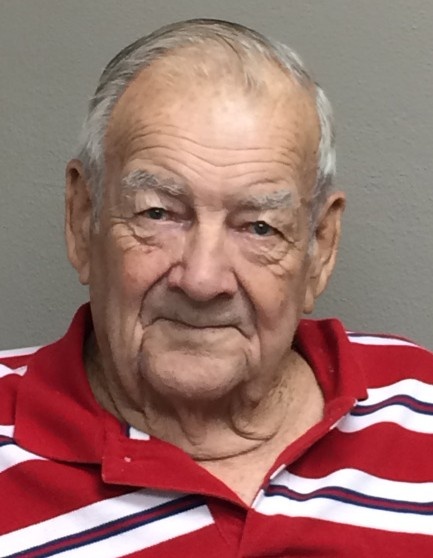 Bob Fuqua passed away on 2 March 2021 at the Veteran’s Home in Winfield, Kansas. Bob Fuqua was born on 4 October 1926 in Long Beach, California.  His parents William Alonzo Fuqua and Lennie Irene (Hazelton) Fuqua were both long time Kansas residents but they moved to California in 1923 hoping to find work.  Bob already had four brothers when he was born.  William (Bill) Francis Thomas Fuqua, Clarence Clark Fuqua, Harry Ivan Fuqua, and Elmer Calvin Fuqua.  Four years after Bob was born, another brother Alvin Bruce Fuqua was also born in California.  In 1931, the family decided to return to Kansas, and moved into a house in Macksville.  There, the seventh and last child, Rose Marie Fuqua, was born. Bob went to grade school and his freshman through junior years in Macksville.  He spent his senior year at St. John High School.  He was very proficient in math and had a good instructor at Macksville High School.  Because of that he was way ahead of all the other math students at St. John.  To handle this, his new teacher had to make up special lessons for Bob so that he would continue to learn and be challenged.  Bob graduated from high school in the spring of 1944.  He worked at various jobs during his school years, such as shocking feed for 50 cents/day, setting pins at the bowling alley, shining shoes, sweeping the local restaurant, and even herding goats.  He was never one to shy away from hard work. After graduation from high school in 1944, Bob joined the army.  He was deployed to the Philippines where he was assigned to an anti-tank unit in Mindanao and Luzon.  Just prior to the war ending, he was assigned to Clark Field and become an MP.  During this time he guarded Japanese prisoners of war and worked with Criminal Investigation Command (aka CID) to hunt down escaped prisoners.  He stayed in the Philippines for another year after the end of WWII and was officially discharged on 30 November 1946. In early 1947, he met Helen Joan Smith in St. John and they were married on 4 October 1948.  Helen and Bob had their first child, Robert Lawrence Fuqua on 12 October 1949.  Then came a daughter, Marian Joan Fuqua on 19 August 1953 and another daughter Denise Rachelle Fuqua on 11 March 1960.  In the early years he worked as an office manager at AB Sales in Great Bend, Kansas.  With a growing family Bob took a second job working several nights a week and Saturday afternoons at a gas station in Great Bend.  Eventually he got the opportunity to buy his own gas station, Bob’s APCO, in Great Bend and that became his one and only job.  After several years, he moved to a different station, Bob’s FINA, also in Great Bend.  He also rented U-Haul trailers at both locations.  As he approached retirement years, he gave up the FINA station and started working at the local John Deere dealer repairing garden tractors.  He did this for many years eventually retiring in 2003.  In addition to all this work, Bob had a wide variety of interests.  Working on cars and garden tractors was always fun for him.  He also enjoyed tromping around in the woods to include hunting, fishing, and camping.  Bob also liked to keep flower and vegetable gardens.  For many years he also served on the Seward town council and was a well-respected member of the community.  Along the way, Bob had both hips replaced. His wife Helen passed away on 6 December 2001 at the age of 71.  He was also preceded in death by his parents and all of his brothers. Bob is survived by a sister Rose Marie Hager of St. John, Kansas.  A son Robert Lawrence Fuqua and wife Linda Donovan of Venice, Florida.  A daughter Marian Joan Dewey and husband Kenny Dewey of Seward, Kansas and grandson Jeremy Dewey and husband Gary Parker of St. Louis, Missouri, and granddaughter Jenny Boyer and great grandsons Damien and Jordan Boyer of Great Bend, Kansas. Also daughter Denise Rachelle Fuqua of Wichita and her family, grandson Walker Schwartz and great grandson Jace Schwartz of Seattle, Washington and their extended family of Jennifer Bliss, Cassandra Schwartz and Cian Casey also of Seattle, Washington and granddaughter Sarah Philbern and husband Nathen Philbern and great granddaughters Matilda Philbern and Allayne Philbern.  Bob lived a good life and did lots of interesting things.  He never knew a stranger and would talk to anyone at any time.  But, most important of all, he and Helen raised a great family. Viewing will be from 1-7pm on 4 March 2021 at Minnis Chapel in St. John.  Graveside services will be held at 10:00am on March 5, 2021 at Eden Valley Cemetery in Seward, Kansas.  Memorials can be sent to the Good Shepard Hospice at 7829 E. Rockhill St. Wichita, Kansas 67206.

To send flowers to the family in memory of Harold Fuqua, please visit our flower store.