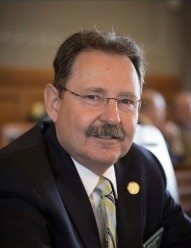 Greg was a near life-long resident of the St. John-Hudson area graduating from St. John High School in 1971.  He continued his education at Kansas State University earning a Bachelor of Landscape Architecture.  He obtained his registration and practiced in Oklahoma and Nebraska before returning to become a farmer/stockman and raise the 5th generation on the family farm.

On February 4, 1978, he met the love of his life, Susan Carol Bentler, on a blind date.  They were married in Raytown, MO on November 4th of that same year.  Greg called Susan his Proverbs 31 wife.  Last November, they were blessed to share 41 years of marriage.

Greg dedicated his time, leadership and artistic talents to his family and to the community. He was selfless in his service to his church families at Calvary Baptist Church, where he was a member, and Trinity Community Church. He particularly enjoyed his work with the CBC AWANA program.  He was a past school board member of St. John-Hudson USD #350 and served many other community organizations and boards.

In what would become part of his closing chapter of community service and in a joint effort with his wife, Susan, he served his friends and neighbors as the State Representative for the 113th Kansas House District.  Through this endeavor Greg and Susan made many friends throughout the District and the State.  He referred to the Statehouse as the ‘People's House.’  Greg resigned last February due to a glioblastoma diagnosis.  He served selflessly the interests of his District, never fearing the prevailing political winds.

Visitation will be on Thursday, February 20th from 1-7pm with family present from 5-7pm at the funeral home in St. John.  Memorial Service will be at the Calvary Baptist Church, 804 NE 40th St., Stafford, on Friday, February 21st at 2:00 pm with Pastor Jeff Lowther presiding.  A private family burial will take place in Fairview Park Cemetery, St. John.

To send flowers to the family in memory of Gregory (Greg) Lewis, please visit our flower store.