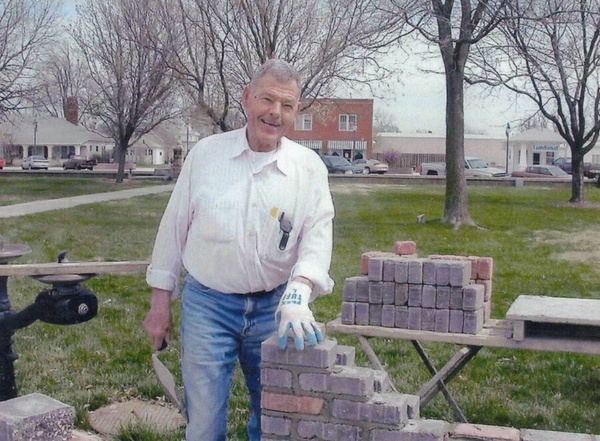 Lewis Garland Mansel was born on February 6, 1931 in Vernon, Texas to Walter Lewis and Berniece Mansel.  He went home to be with his heavenly father on February 19, 2022, surrounded by his family.  He was a young 91.

Garland married Dena (Campbell) on September 3, 1960 and moved his family to St. John in 1963.  Garland was a brick mason by trade, working from the age of 15 and retiring after 63 years of creating beautiful work for thousands of people.  Garland loved his work; he was   of an artist than a mason.  If you ever visited him on the job site, you would hear the country music playing on the old radio he carried around.  His sons and grandsons all helped through the years in the business.  The business he built was then passed on to his son and then to his grandsons.  Garland had a tremendous work ethic and passed that on to his children and grandchildren.

He also loved gardening and blessed the community by leaving produce and peaches on doorsteps all over town.  He never knew a stranger and everyone he met was better off for knowing him.  He had a positive attitude that was contagious and was always ready and willing to help out someone in need.

Garland was a God-fearing man, and let God's word lead his life.  One of his favorite Bible verses was Micah 6:8.  "He has shown you, O man, what is good.  And what does the Lord require of you? To act justly and to love mercy, and to walk humbly with your God."  His life modeled that passage.  He was one of the kindest and most humble men you would ever know.  Garland was active in missions to Old Mexico with the church, constructing buildings and assisting the under-privileged, sharing God's love for them all.  His son Jon, wife Dena and various grandchildren often joined him on these missions.

Garland served on many boards and committees in St. John.  He served on the USD 350 School Board for over ten years; Fairview Park Cemetery Board, City of St. John Zoning Board, and the St. John Main Street Program.  He was a past grand master of the IOOF Lodge #539, and received the Meritorious Service Jewel of the Order of Odd Fellowship.

Garland will be so missed by all that knew and loved him.  But we know he's already busy in his new home with his heavenly father and all of the loved ones that went before him.  He told a grandson that once he got to heaven, he was going to lay the golden bricks.  And I'm sure he's already started.

Memorials may be mailed to Minnis Chapel, PO Box 34, St. John, KS 67576.  The following memorials have been established in honor of Garland:

To send flowers to the family in memory of Garland Mansel, please visit our flower store.