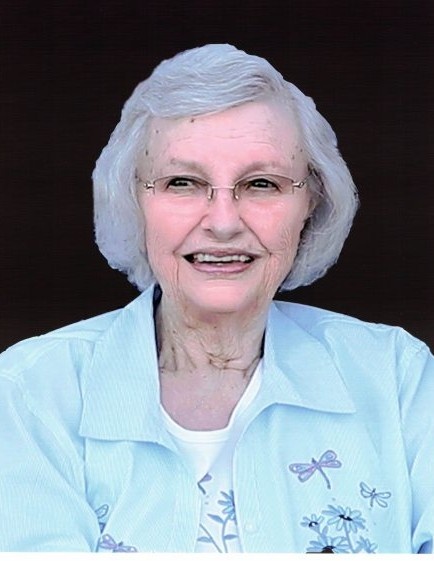 Fern Irene Fairchild, 90 of St. John, died on August 16, 2019.  Fern was born on April 17, 1929 in rural Stafford, Kansas and was the daughter of Joseph B. Giedinghagen and Maggie Giedinghagen.  She attended “country school” in rural Stafford.  Fern loved to tell stories and described riding a horse to country school with her younger sister Jean and her older brother Milton.  Fern graduated from Stafford high school in 1947 and then attended business school at “Emporia State College.”  In 1948, she started her first job at Farmer’s National Bank in Stafford.  She later worked at a bank in Independence, Iowa and at St. John National Bank in Kansas.  Fern was known for her meticulous book-keeping and her friendly customer service.

In 1950, she married Keith Fairchild. Keith was from Iowa but was working in Kansas putting up REA lines.  They met on a blind date.  Keith and Fern moved to Independence Iowa and worked at the John Deere factory—Fern as a bookkeeper and Keith on the assembly line.   While in Iowa, Fern and Keith lived in a silver mobile home in Keith’s parents back yard.  They enjoyed hosting friends for game nights in their mobile home.  In 1952, Keith and Fern moved back to Kansas and started farming in St. John.

Fern was a hard worker. In addition to working at the bank, she worked on the farm and drove grain trucks, transported people to fields, meticulously maintained the yard, and brought many meals to the harvest field.  She and Keith also had a 500-head flock of sheep.  Fern shared this responsibility with Keith and was responsible for delivering lambs when Keith was away driving the school bus. Fern also cared for a large flock of chickens, sold eggs, and even sold chickens to the local hospital. Her hobbies included: Singing, playing the piano, gardening, canning, and crocheting.  She also enjoyed participating in Mother’s Club and Kenilworth EHU, Women’s Missionary Fellowship.

Fern was a life-long member of Calvary Baptist Church.  She worked with many children in the scripture memory program, AWANA program, and in Sunday School.  She taught Sunday School for 50 years and “retired” only when it became too difficult for her to climb the stairs.  Fern’s son Kurt, daughter-in-law, RoAnn, and grandchildren Jenny, Jaime, and Brett were the apple of her eye.  She loved sharing stories about Kurt and her grandchildren with everyone she met.  And, she focused much of her life on demonstrating love to her family.  Fern loved crocheting, embroidering, and cross-stitching, and made beautiful things for her grandchildren.  She also attended nearly all Kurt’s sporting events, concerts, etc. and did the same for her grandchildren.   She cut out every newspaper clipping which contained the names of her grandchildren and put them in binders for them to have as keepsakes.  Fern was known for keeping a tidy house.  Yet, she did not mind her grandchildren or great-grandchildren leaving fingerprints on her glass doors and let them take apart her (white) couch and make pillow forts.

All who knew Fern will remember her winning smile, friendliness, kind words, and remarkably positive attitude.  Her faith played a big part in her positive attitude and ability to accept difficulty without complaining.  Fern battled cancer twice, lost her husband, Keith, to cancer in 2010 and lost her house and many of her possessions in a tornado that hit Fairchild Farms in 2012.  The night her house was hit with a tornado, Fern came out of her shelter, looked up her stairs and saw that the roof had been blown off her house.  The two men sent to help her get out of her house found her sitting in her easy chair downstairs reading her Bible with a generator-powered light.  Later, her granddaughter, Jenny, asked her what she was reading that night and Fern replied “Psalms.”  And, that peace characterized her life.  She will be missed by all who knew her.

Funeral service will be 11:00am, Tuesday, August 20th at Calvary Baptist Church, Stafford, with Pastor Jeff Lowther presiding.  Private burial will be in the Fairview Park Cemetery, St. John. Visitation will be Monday from 4:00-7:00 at Minnis Chapel. Memorials may be given to Calvary Baptist Church, Gideons International, or USD 350 Education Fund in care of Minnis Chapel, INC. P.O. Box 34, 526 E. 4th, St. John, KS 67576.

To send flowers to the family in memory of Fern Fairchild, please visit our flower store.