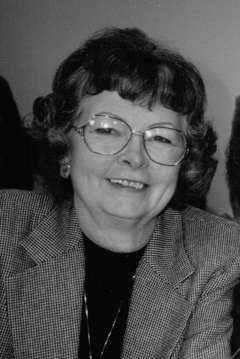 She was born on December 26, 1933 on the family farm in Ohio Township, Stafford County Kansas. Doris was the fourth child and first daughter of Earl and Marie Cooper Fox.

Doris and her five brothers attended the Sunshine School in Ohio Township until 1945, when it was closed. They then attended the Leesburg Consolidated District 4 School in Rose Valley Township through the 8 th grade. Doris attended St. John High School and graduated with the class of 1952. Doris was a member of the St. John Baptist Church.

On July 27, 1952, Doris married Ray Anderson at the Christian Church in Great Bend, Kansas. They made their home in St. John until 1966. The couple was in the Hospitality Administration business for many years. Throughout the years their business took them many places throughout the country. They retired in 1994 and moved back to Stafford County.

Funeral service will be Saturday, December 6 at 2:00 p.m at the First Baptist Church in St. John with Pastor Roland Broeder officiating. Interment will follow at the Stafford Cemetery. A viewing for friends and family will be held at 6 p.m. Friday evening at Minnis Chapel in St. John.

To send flowers to the family in memory of Doris Anderson, please visit our flower store.