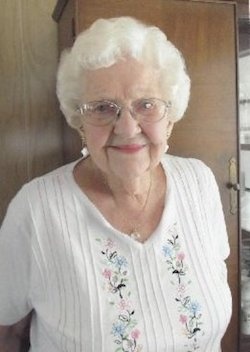 St. John - Cleora Katherine Francis, 95, passed away peacefully in her sleep on April 27, 2014 at Kenwood Plaza in St. John. Cleora was born at home on April 10, 1919, to Theodore and Hulda Louise (Alpers) Witt of Hudson. On Aug. 26, 1940 she married Wayne Philip Francis at Hudson, KS. Survivors include three children, Lynn Francis (Vicki) of Grand Rapids, MI; Diana Fox- Seitz (George) of Broomfield, CO; Rita Hewson (Galen) of Larned; 9 grandchildren, 18 great-grandchildren, 9 step-great grandchildren; 2 step-great, great grandchildren; and one sibling, Orpha Wretling of Fort Collins, CO. She was preceded in death by her husband, Wayne Francis; a son-in-law, Austin Fox; a grandson, Russell Francis; a sister, Veleta Mueller; a brother, Norman Witt; and an infant brother, Vernon Witt. Cleora was a gentle woman, who loved Jesus Christ as her Lord and Savior. She will be remembered for her love of the people and especially the children in her life. Her memberships in the community included First United Methodist Church, United Methodist Women, Progressive Mother's Club, PEO, Red Hats and Hudson Senior Center. Services will be held on Thursday, May 8 at 4 p.m. at the St. John First United Methodist Church, 807 E. First. Her grandson, Pastor Monty Fox and Pastor Irving Simon will be presiding. All are invited to supper following the service at the Odd Fellow's Lodge just west of the church. In lieu of flowers, memorials may be given to the St. John First United Methodist Church, Kenwood Plaza Assisted Living of St. John, or the Hudson Senior Citizens all in care of Minnis Chapel, P.O. Box 34, St. John, KS 67576.

In Lieu of Flowers, Contribution

To send flowers to the family in memory of Cleora Francis, please visit our flower store.