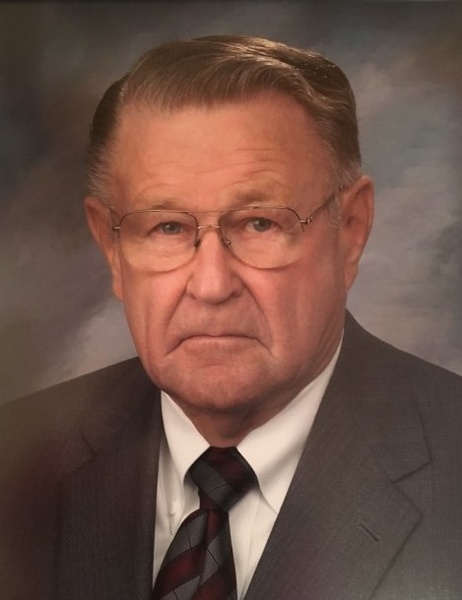 Carl Dudrey, age 86, passed away March 17, 2018 at Leisure Homestead, St. John.  He was born on June 13, 1931 in rural Rice County, KS, the son of Howard and Elsie (Harris) Dudrey.  Carl was a resident of Stafford, KS, since 1981, was owner of Dudrey Cattle Company, St. John, KS., Chairman of the board of First Bank, member of the board for Kansas Ethanol.  Carl was a US Army Veteran serving from 1951-53.  In January of 1981, he married Bonnie (Hafford) Tennant.  She preceded him in death on March 20, 2014.  He was also preceded in death by a sister, Vera Mae Batten, four brothers, Lawrence, Wayne, Don and Larry Dudrey.  Survivors include a step-son, Kevin Tennant (Karen), Dardenne Prairie, MO; a step-daughter, Janice Marie, West Chester, PA; a sister, Gladys Hornbaker (Don), St. John, KS; three grandchildren, Kyle, Kory and Kailey Tennant.  Funeral service will be 10:30 AM, Wednesday, March 21, 2018 at the I.O.O.F Lodge, 700 E. 1st Ave., St. John.  Burial will follow at Fairview Park Cemetery, St. John.  Visitation will be on Tuesday from 1-7PM at the funeral home in St. John, with family present from 5-7PM.  In lieu of flowers donations may be given to support educational projects in St. John and Stafford. Donations may be made to the South Central Community Foundation online at sccfks.org or sent in care of Minnis Chapel, P.O. Box 34, St. John, KS  67576.   Condolences may be left at www.minnischapel.net

To send flowers to the family in memory of Carl Dudrey, please visit our flower store.