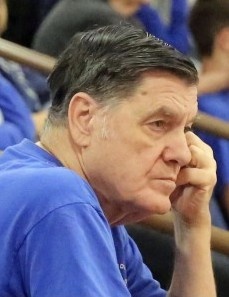 Barry C. Ragan, age 78, passed away on April 17, 2021, at Wesley Medical Center in
Wichita, KS. He was born on July 5, 1942, in Wichita, KS, the son of Donald and Eva
(Jeffries) Ragan. Barry graduated from Kiowa High School in 1960. He received his
bachelor’s degree in music from Southwestern College, Winfield, KS and a master’s
degree in music from Wichita State University. Barry was drafted into the US Army in
1968 and attended the Naval School of Music in Virginia. He served the remainder of
his Army career in the Big Red 1 Army Band in Ft. Riley, KS, where he was a trumpet
player and bugler. He was honored to be selected to play Taps for the Presidential
Wreath Laying Ceremony for all branches of the military at the Dwight D. Eisenhower
Presidential Library, Abilene, KS.
He married Sue Dickenson in Hutchinson, KS in 1970; they later divorced. He taught
vocal music for the Nickerson-South Hutchinson School District and the St. John-Hudson
School District until his retirement in 1993. He was a big supporter of St. John athletics,
sports writer for the St. John News, played in the Tiger Pep Band, was the choir and bell
choir director for the First United Methodist Church and was Citizen of the Year for St.
John. He was instrumental in establishing St. John as a Tree City and served on the St.
John City Tree Board.
Survivors include his son, Scott (Jessamee) Ragan, Topeka, KS; sister, Donita Ragan,
Kiowa, KS; brothers, Craig Ragan, Hardtner, KS, Jim (Carol) Ragan, Salina, KS, Phillip
(Tammy) Ragan, Winfield, KS; several nieces and nephews.
There will be a visitation from 5-7 p.m., Sunday, April 25, 2021, at Minnis Chapel, St.
John. Memorials may be given to the First United Methodist Church in care of Minnis
Chapel, PO Box 34, St. John, KS 67576.

To send flowers to the family in memory of Barry Ragan, please visit our flower store.