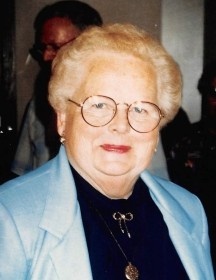 Anne Louise Keeley, age 97 was called home on July 21, 2019 at Pratt Health and Rehabilitation, Pratt, KS.  She was born on September 30, 1921 in Minneola, KS, the daughter of Edward Jay and Pearl Ethel (Hopkins) Long. Anne graduated from Radium High School in 1939 and later from Dodge City Beauty School.  On November 25, 1939, she married Keith Raymond Keeley in Larned, KS.  Following their relocation to St. John, KS, Anne was a homemaker, librarian, school cook, beautician and an avid home cook, loved for her wonderful angel food cakes.  She had been a member of the First United Methodist Church, Hesperian Club and Mother’s Club all of St. John.

She was preceded in death by her husband Keith in 1992, a son, Bradford Keith Keeley; a daughter, Dorothy Anne Kastning; a brother, James Norton Long and a sister, Dorothy Lorene Henry.           The family will receive friends at the First United Methodist Church on Saturday July 27, 2019 from 11:00am to 12:00pm.  A private inurnment service will take place in the Larned Cemetery, Larned, KS.  Memorials may be given to the First United Methodist Church in care of Minnis Chapel, PO Box 34, St. John, KS 67576

To send flowers to the family in memory of Anne Keeley, please visit our flower store.