J.W. Minnis, (1863-54) started the family institution of funeral service in 1892 after becoming a licensed funeral director/embalmer. His license number was 47 in all of Missouri at the time. He owned and operated the Minnis Furniture and Undertaking Company of Bogard, MO., where he was active until 1921.

Herman T. Minnis, Sr., (1893-1977) son of J.W., became active in 1912 after graduating from Ambruster College of Mortuary Science, St. Louis, MO. He had many memories of trips with his dad in a horse-drawn hearse in the hills of Missouri. In the early days he used to trim caskets for extra money and usually there were only two colors…black and grey cloth.  In 1927, he moved to Bucklin, KS, where he became owner/operator of Minnis Mortuary where he worked until his death in 1977. 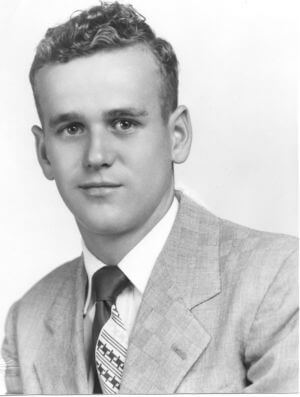 H.T. Minnis, Jr. (Bud) (1928-2013) son of Herman and Alberta, initially started the third generation of funeral service in 1949 when he worked with his father in Bucklin.  In 1965 he moved his family to Larned where he operated the Vernon Funeral Home for many years eventually moving back to his Bucklin roots.

J.W. Minnis, (Jim) (1933-2001) (pic to right) youngest child of Herman and Alberta, became a licensed funeral director/embalmer in 1958 after graduating from Dallas Institute of Funeral Service. Jim served his apprenticeship at Ayres-Calbeck in Pratt, KS, and later worked for Cook and Weber Funeral Home in Great Bend, KS.  In 1959, Jim and Anna moved to St. John, Ks, where they purchased the Barber Funeral Home which served the area until 1966. That year a new funeral home was built in St. John, Minnis Chapel. This facility is still in service today.

H.T. Minnis, III (Ted) (1951-active) son of Bud and Phyllis became the fourth generation of funeral service in the Minnis family after graduating from San Francisco College of Mortuary Science in 1972.  Ted and his wife Karen came to Bucklin in 1978 and he and Bud opened the Minneola branch in 1985.  Ted and Karen still operate the Minnis Mortuary’s in Bucklin and Minneola, KS.

Mitch D. Minnis, (1961-active) son of Jim and Anna, entered his service as a fourth generation funeral director/embalmer in the summer of 1985 after graduating from Kansas City, Kansas School of Mortuary Science. In 1985, Jim and Anna purchased Breitenbach Mortuary in Macksville.  Mitch and his wife Lisa managed the new Minnis Chapel in Macksville and lived there from 1985-1995 before moving to St. John after Jim’s retirement, becoming owner/operators of both the St. John and Macksville locations. Both businesses are still very active today.

Jay M. Minnis, (1964-active) son of Jim and Anna, also entered his service as a fourth generation funeral director/embalmer in 1989 after graduating from Kansas City, Kansas School of Mortuary Science. In 1989, Jim and Anna purchased Peacock-Milton Funeral Home in Stafford.  Jay and his wife Adrienne moved to Stafford, in 1989 where they remain active in funeral service to this day.

Ryan James Minnis, (1988-active) son of Mitch and Lisa Minnis, entered as the fifth generation funeral director/embalmer in the Minnis family tradition of funeral service.  Ryan graduated from Dallas Institute of Funeral Service with the highest honor given to a student; Valedictorian of his class, 55 years after his grandfather Jim before him.  In 2012-13, Ryan served his one year apprenticeship with Kimple Funeral Home in Ellinwood, KS.  In September of 2013, Mitch and Jay purchased Kimple Funeral Home and re-named its new Barton County establishment, Minnis Chapel, Ellinwood.  Ryan is currently manager of this new location.